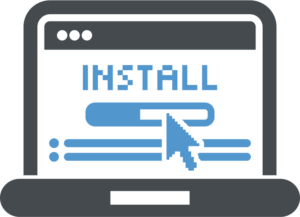 How to correctly install Dragon

1. Do's and don'ts for Installing Dragon

Be sure that you save your Dragon install files to a safe location, along with including your Dragon serial number. We strongly advise that you save it to a USB thumb drive, or an external drive. Saving these to your desktop or to your boot drive is inadvisable because if your system crashes and you have to reinstall Windows, you may lose those files.

Don’t attempt to install Dragon on other than your boot drive (C drive). Most of the program files and some common files will be installed on your C drive regardless. These cannot be moved or installed anywhere but on your boot drive. The largest portion of Dragon is/are your user profile(s). You can always move these to a secondary drive or other location if you so desire. You can also load and run your user profiles from external drives and/or USB thumb drives as long as they are of sufficient size.

Also, make sure that you are using a C drive with sufficient disk space. Your C drive should be no smaller than 256 GB, and preferably 512 GB or larger. We recommend solid-state drives (SSD). SSD’s will not increase the performance or accuracy of Dragon, but they will allow both Windows and Dragon to load faster. Keep in mind that Dragon runs completely in memory (RAM), so installing and using an SSD will not make Dragon run faster. You need at least 120 GB of free space on your C drive for Windows and applications, such as Dragon, to load and run properly. Just keep in mind that if you run out of drive space, you will run into problems running applications and Windows, most specifically Dragon.

We strongly advise that users have a minimum of 8 GB of RAM (Windows 64-bit) and preferably 16 GB or better. Avoid using 32-bit versions of Windows. 32-bit Windows restrict you to 4 GB of RAM maximum, and, with regard to Windows 7, less. Having or using only 4 GB of RAM can slow Dragon down to a crawl because, if you load too many applications, Windows will have to swap them out to the pagefile when RAM must be freed up. If this happens with Dragon, you can see latency issues up to 1 to 2 minutes cropping up. Just not a good idea to have less than 8 GB of RAM on your system, as well as having access to such by using Windows 64-bit versions.
If you have a previous version of Dragon installed, Never install a newer version of Dragon over top of a previous version without first uninstalling the previous version. This applies to installing any newer version of Dragon when a previous version is currently installed, but is particularly true regarding Dragon Professional Individual 15 (DPI 15). The reason for this is that you can never guarantee that Dragon Professional Individual 15 (DPI 15), or any version of Dragon newer than your current one, will properly uninstall when installing a new version of Dragon over top of an older one. All too often this can result in disaster (i.e., a corrupted install and/or failure to run properly).

This page is an excerpt from VoiceComputer's installation lesson.

VoiceComputer features an interactive 'Virtual Dragon Trainer'. - Help and training that you can access with simple voice commands as you are working

VoiceComputer's help and training will help you guarantee your success with Dragon with dozens of lessons, demonstrations, tutorials on Dragon and hundreds of 'cheat sheets'.

Note, if you are upgrading and your previous version of Dragon (installed version) is Dragon Home, be aware of the limitations on exporting and importing profiles and custom vocabulary. In the Home versions you cannot export your user profile and you have limited or no access to exporting your custom vocabulary. Basically, you should treat any version of DNS Home as requiring starting over from scratch. That is, you will likely have to reenter and reset any custom vocabulary anyway. Just be prepared for all the limitations associated with DNS Home.

If, for whatever reason, you wish to return to your previous version of Dragon, be sure that you uninstall your current version while connected to the Internet so as to preserve your activations.

ALWAYS download and run the current DPI15cleaner (DPI15Cleaner.exe). This remove utility is backward compatible with all versions of Dragon and ensures that any previous version of Dragon that has been uninstalled is completely cleared off your system. Go to the following link and carefully read the instructions before using the current Dragon remove utility:

How to completely uninstall Dragon
Should you experience any problems after upgrading from an older version of Dragon to a new one, particularly with regard to DPI 15, don’t try to beat it to death to get it to work. Simply uninstall it, run the Dragon remove utility, reboot your system and reinstall.

2. Tips and techniques for installing Dragon

Be pain-free at your PC

Now you use voice control instead of your mouse or touchpad or use your voice in conjunction with your mouse/touchpad.

We make accessibility simple and productive.

Who does VoiceTeach, LLC serve?

VoiceComputer enables our users to return-to-work and school despite physical challenges that range in severity from RSI and carpal tunnel to quadriplegia and other severe physical challenges. VoiceComputer’s unprecedented voice access and control of your computer and applications will completely change what you can do with Dragon.

VoiceComputer delivers a whole new world of accessibility. Accessibility that delivers the highest possible productivity and ease-of-use so that for the first time ever, your company’s or agency’s Intranet sites, Citrix and legacy applications are accessible to your employees without expensive and time-consuming customization.

The Bottom Line: What Results Can I Expect When I Select VoiceTeach, LLC?

Many VoiceTeach, LLC training clients achieve complete hands-free operation of their computers within hour of training. Others strike a balance between speech and manual input for their own optimum control, productivity, and efficiency. Whether that balance is at 50%, 70%, or 100% voice input. VoiceTeach, LLC enables high productivity, reliable operation, and complete satisfaction with the training services that we provide.

By using VoiceComputer in combination with Dragon, our training clients get to take advantage of the full VoiceComputer hands-free system.

In the first hour of training, our trainers provide a full introduction to Intag – the easiest to use and most powerful speech recognition technology.

For users with proprietary applications like Citrix, that are not compatible out-of-the-box with speech, our trainers provide customization. With My Intags, your hard-to-control applications can be customized quickly and easily without the need to create and memorize hundreds of commands.

Our trainers also provide personalized lessons that incorporate the VoiceComputer Tutorial System which is available to our clients even when we are not. The Tutorial System provides more than 40 hours of lessons and demos and dozens of cheat sheets and At-a-Glance guides that teach you how to use Dragon NaturallySpeaking and help you remember commands. Our Tutorial Program is the first help, demonstration, and tutorial program that is always just a speech command away and will bring you the information you need, when you need it, without blocking your work with unnecessary windows.

Dozens of Other Hands Free Features

Why do you need VoiceTeach, LLC?

Why do you need VoiceTeach, LLC?

Our training is designed and personalized to cultivate success. Our mission and passion is to make hands-free computing a reality and we will commit to each client fully to ensure our mission is accomplished.

Since its introduction to the market roughly 20 years ago, speech technology accuracy and ease of dictation has greatly improved. But even now, it is still a tool that requires, at a minimum, basic training and support crafted specifically to the needs of the individual user. While it is the case that some people succeed in their own, they are often the exceptions. Millions of speech software packages have been sold, but how many users give up within weeks of installation. This is largely due to the reality that the applications most workers use today are not fully accessible with speech recognition or require too many complicated commands to be genuinely useful. VoiceTeach’s training and support services make the difference that enables you to succeed. The support starts with careful evaluation and user support. We then determine what hardware is needed and proceed to proper installation and initialization of the speech package. This then concludes with personalized training, thorough documentation, and continued support.